Our Chef of the month is no other than Malcom Chow of Chow's Table. 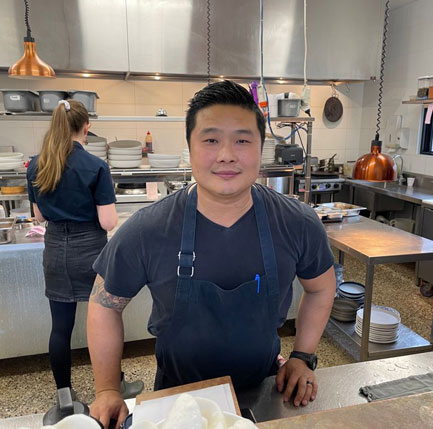 Mal’s history extends to the shores of Malaysia, Kuala Lumpur where he lived with his family, before migrating to Melbourne, Australia when he was 6 years old. The family set up a traditional Malaysian restaurant in Knox, Wantirna, Victoria, called Malaya.

Mal become a chef is out of his love of food, and eating. Discovering different cuisines, flavours and all types of culinary delights is the biggest joy, a large part of this is being inspired by fine dining French Cuisine chefs.

He started out as an apprentice at Vue De Monde, Melbourne, learning from Shannon Bennett (now owner of Burnham Beeches and Bakery:Cafe).

Through his apprenticeship he then relocated to Sydney and worked at Tetsuya’s under Martin Benn (currently at SOCIETY Melbourne. Surrounded and inspired by other chefs working there like David Pynt, Phil Wood and Dan Hong (Mr Wong, The Establishment, Lotus Sydney all for the Merrivale Group).

Mal then did a stint with Daryl Martin who now runs Bazarri in Marrickville. Mal decided he needed a break and it just so happened around the same time he met his wife, Amanda, who was a WA girl living in Sydney. They both decided to move for a change of scenery. He is now completely happy and settled in to the Dunsborough-Yallingup way of life, with their two young boys aged 5 + 6.

Mal was sous chef at Studio Bistro in Yallingup for 4 years with under Blair Allen (now owner of Amelia Park Restaurant).

Three years later Mal met the owners of House Of Cards Winery in Yallingup, Travis and Elizabeth Wray, who made an offer to build him a restaurant facility at their winery and Mal settled into life as a restaurateur and head chef of his own venue – Chow’s Table. The influence for the menu is Chinese cuisine, with a very strong focus on using fresh, quality local produce. Mal is always creating and evolving the menu to inspire people from Perth and interstate to travel to the local area and visit his restaurant. He is an ambassador for Haier white goods and has travelled to China – Shanghai for one of their major exhibitions.

Most recently launching a range of pre-packaged sauces. Currently exporting to China and about to launch locally into the Australian market.

Mal uses our Black Perigord Truffles in many of his Asian dishes as they compliment the wok with their earthy flavours.

Their highest selling dish is a fried rice with truffles and they match in beautifully with steamed cooking in particular with dumplings. You can book at Chow’s table 7 days a week for Lunch and Dinner.

Processing...
Thank you! Your subscription has been confirmed. You'll hear from us soon.